This tag is associated with 3 posts

I have nothing against raspberries.  Though in an HBR article from exactly a decade ago, my life temporarily was all about that color.  It explored the democratization of innovation in healthcare and on innovative approaches that drove breakthroughs in thinking and value. Back then, I would jump into my raspberry-colored scrubs to explore hospital environments with nurses, doctors, patients, and other scrubbed-up innovators. Ten years later, those HBR insights from 2010 are still relevant.

As in 2010, the focal point remains centered on the people who are experiencing the challenge.  And this is both the end-user and the other humans involved. There are pain and joy points for both, and focusing on only one type of actor skews the design. One additional group that I now explicitly include is leaders. They play an essential role throughout the innovation lifecycle, but they are not often thoughtful included. Worse, if they are excluded in the innovation journey or are in the wrong mindset to lead innovation, even the best ideas get thwarted.

If there is no way for your invention to drive value, it is not an innovation. What was not well understood ten years ago (by many of us) was how the business model is very much part of the design too.  In working on Nod with our partner Grit Digital Health, not only did we create a solution that reduced loneliness, we designed it in context to how Grit would get it into its college distribution channel, and thus in the hands of young people.

Lew McCreary, the author of that HBR article, made this explicit: “ …by democratizing the methods of innovation, [they] are democratizing health care, giving patients and [caregivers] a louder voice in designing the future.”  In 2010, I was on an innovation, diversity, and inclusion panel.  I focused on what I believed was the inherent diversity/inclusion of human-centered design and talked about how we ensured there was a diverse group of users who were co-creating with us.  Ten years later, I now know that was not enough. Justice and equity must be bedrock design principles for the innovation AND the innovation team – they are inseparable.

In one of my final projects at Kaiser Permanente, our design team focused on improving the transgender-person care experience.  While sharing at a conference that we were about to launch this work, a woman approached me and said, “I am a designer. I am a trans-woman, and I am a KP patient. How can I help?”  Within weeks she was on our team helping kick off this work, contributing to and reviewing the design research plan, and ensuring we were doing our homework BEFORE entering the field.

And so ten years later, it is still about the humans, about driving real value, and the ideal of innovation democratization. I don’t imagine this will change as I look out to 2030, but I do see a continue deepening and sometimes re-imagining as we solve real problems that real people have and ensure we do so in a just and sustainable way.

As a part of the InnovationLearningNetwork.Org InPerson Meeting in Los Angles this week, attendees split into a dozen groups and were set loose to hunt for insight and inspiration. My team and I found it at the Getty Museum exploring the evolving museum industry and its future. It was remarkable how similar its challenges are to healthcare…and how much we can learn from their experience.  Nik Honeysett, its Administrator gave us the 101.

First of all, the industry changed “overnight”.  For centuries, highly skilled curators would collect and interpret.  And the public had only one option; go to the museum to see it. Then with little warning, the public got a voice via the internet. And the paradigm began a monumental shift: the public wanted new ways to see the collections, they wanted to talk about it, and they wanted to help influence it.  The museums were not prepared for this voice, nor have most learned yet how to harness it fully; but they are learning.

Nik shared a story of a Canadian museum of fine art that attempted to crowdsource an exhibit.  The public submitted and voted for a hockey exhibition – not exactly what the museum had in mind; or even in the genre of fine art.  Although this was shared as crowdsourcing gone wrong, I can easily image a twist where the museum could have commissioned a series of oil paintings of hockey scenes; dragging in a whole new audience into their world.

Next technology seeped into the museums.  Most often it was a random employee who just happened to know how to flip on a PC, they were the first museum technologists. Interestingly, museums were the first to bring touchscreens and hyperlinks to the public in 80’s.  Not so bad for being homegrown. Recently there has been a shift to bring in trained technologist, but at the expense of “sullying” the inner museum world with those who did not rise through the ranks. Finally, new and interesting business models began to emerge.  As most museums are not-for-profit, and have similar missions, rather than competing, they focused on cooperating. Deals like two venues for the price of one began to emerge.  “Retail museums” began to appear as popup stores in downtown areas .  And unique combinations like museum and DJs began providing new experiences for new crowds.

And so healthcare is not as unique as it perceives, and has much it can learn by simply going out into the world.  I am certain that the other eleven groups found an equal amount of insight and knowledge in their LA exploration.  Meanwhile, go to the museum; the inspiration is curated for you.

#Innovation with Information Technology in #Healthcare 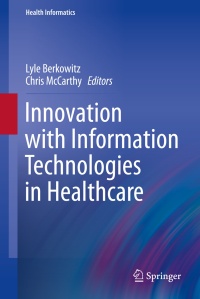 I am thrilled to announce our book’s release.  You can order it here:

From Chapter 1 of “Innovation with Information Technology in Healthcare” by Lyle Berkowitz and Chris McCarthy:

“Let’s face it, most of our healthcare clinical processes are so last century. However, a revolution is brewing. More and more providers are slipping into the Twenty-First Century quietly and without fanfare. They are figuring out how to deliver care that is not only medically superior, but is operationally modern as well. And they are creating stories which are helping to awaken our spirits and move the rest of us forward. And this is good news for everyone!

These stories range from a rural healthcare system leveraging telemedicine strategies to an academic medical center using EHR decision support tools in a novel way. They span from a small clinic using a new type of home monitoring device to one of the largest healthcare organizations in the world trying new and exciting ways to manage and relate to their patients. What these organizations have in common is their relentless pursuit of making healthcare delivery better for patients and providers alike. They are defining a new type of health system, where technologies are seamless and delivering perfect care is easier and more cost-effective than the alternative.

Most of the innovations in this book are not revolutionary nor radical. In fact, they are expected and obvious in many ways. Consumers in other industries have demanded far more than they have of healthcare. Imagine if a bank told a customer that it would take a few weeks to see a bank balance. Imagine if an airline wouldn’t let you book your own flights. Imagine if there was no way to compare car features or prices.

We in healthcare have just moved beyond the start line, and have a long way to go. Fortunately, healthcare organizations which are already innovating in this space are setting the pace and moving in the right direction, towards their own “Healing Edge”.  And hopefully this book will help you get there too!”